Paying for It: a comic-stip memoir about being a john
by Chester Brown
Drawn & Quarterly, Hardcover, 272 pages, May 2011

now here is something: a book that questions our most common assumptions about romantic love, but from a perspective neither of bitter longing nor of self-back-patting-and-ultimately-self-deluding contrarianism. Chester Brown maps his feelings the way a good anthropologist might compile an ethnography of a heretofore mysterious culture ... calmly ... factoring in his own biases and weaknesses ... and patiently recording even his most minute reactions ... until a clear picture emerges for both him and his audience of friends and readers. Yes, it is a compulsively readable document of one john's experiences with 23 different prostitutes (24 if you twice count one woman who uses two different aliases) over 5 years, but its most striking developments are gentle shifts in Chester's mind, not adventures of the body ... There'll be no epic quest ... nor sense of dread ... nor conquest ... just Chester's narrow white ass as he thrusts into a black-haired woman whose face is obscured by a word balloon, or by distance, or by the position of her body in relation to his, or by the panel's edge ... their two bodies haloed by an explosion of white light against solid black ink ... embedded in an invariable eight-panel grid ...... and juxtaposed with Chester's thought balloon full of candid running commentary: "She's licking and sucking my balls -- I wish she wouldn't do that. It seems unsafe." Or: "She's more beautiful than any of the prostitutes I've been with so far." And over the course of 227 pages of banging interspersed with coffee shop conversations with his closest friends and down time alone in his room, Chester Brown's estimation of the virtues of romantic love plummets from not that high to near zero.

Paying for It ends up more like a moral argument than a personal bedroom history, as Chester, in a blank-faced manner, aims his knives at the dream of romantic commitment. According to him, marriage and long-term relationships are corrupt institutions that we accept at the cost of integrity, honesty, and happiness. "It's impossible for one person to meet all of our emotional and sexual needs," he says with Canadian equanimity, politely, with that eerie blank face. 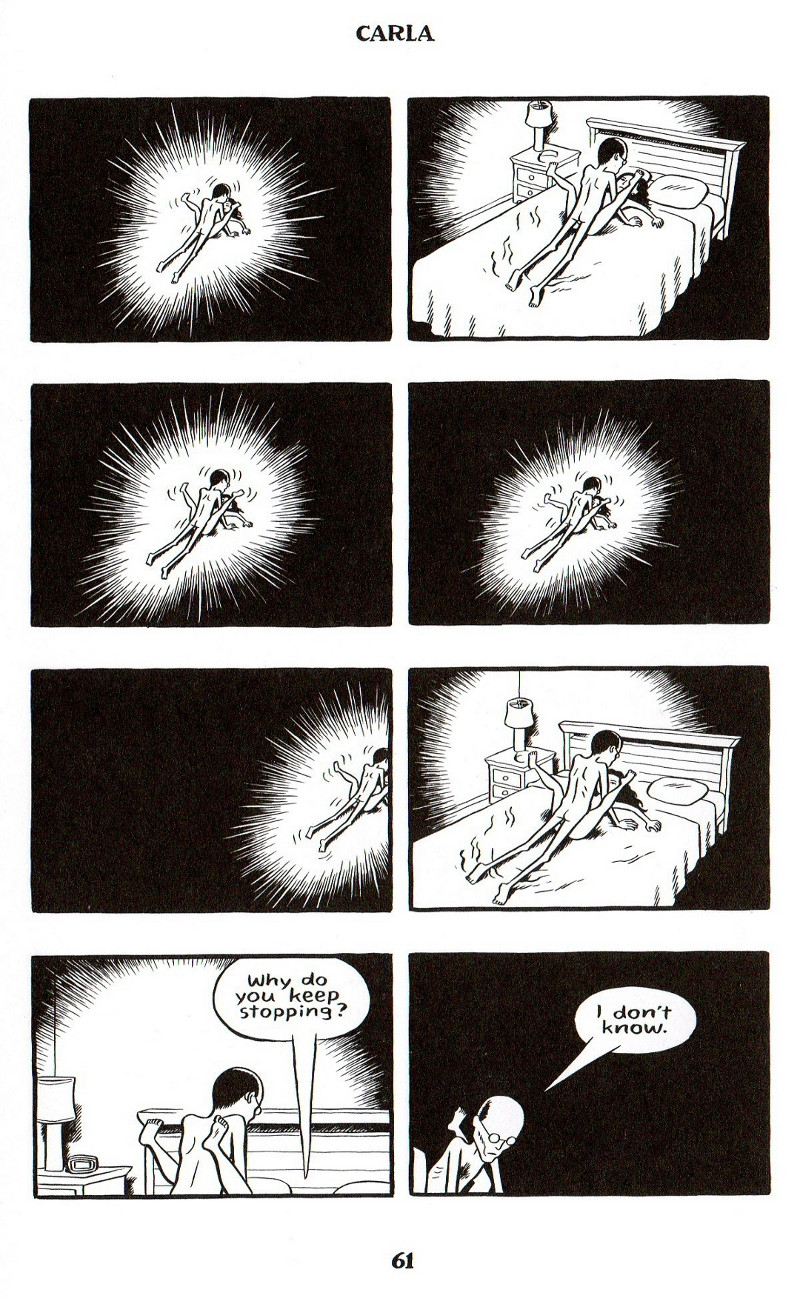 All of this transparent polemicizing ought to be surprising coming from a cartoonist who's best known for anything-can-happen supernaturalism (Ed the Happy Clown), innocent (yet vaguely creepy) sex stuff (The Playboy, I Never Liked You), and unadorned (yet vaguely creepy) recreations of historical oddballs (Louis Riel, the Gospel adaptations); but it turns out that Chester's political side suits him just as well as everything else he's tried. It's not an ostentatious put-on, or a knee-jerk reaction to a life that has treated him unkindly and which he now thinks owes him big time ...... Chester Brown's anti-love stance seems like a considered and thorough response, developed -- whoremongering notwithstanding -- in isolation.

I'm left with a few questions, fortunately, as this is a short book on an infinite topic. For all of his ranting against Western culture's unexamined assumptions, Chester's got a few unexamined ones of his own. He says, "I don't have the social skills necessary to pick up women for casual sex." Well, what if he did? Would love be possible then? How reliable a narrator is Chester Brown? Aren't the highs of love worth the lows? Isn't that why most men won't pay for it? What if ...... all love is a zero-sum game? We're all paying for it, one way or another. Some men tell lies. Some men pay in niceness dollars and get loved, and then get stomped, and then find them some religion. Some men love to fuck fat women. A few men are famous. And then there are those elusive social skills, which allow some men much access to fine women at a low cost to themselves. Who's paying then? You see where this can go in a million different directions, none of which are directly treated in Paying for It, but which are nevertheless sitting there, swimming vigorously under the dome of Chester Brown's reservoir tip.